Warning: "continue" targeting switch is equivalent to "break". Did you mean to use "continue 2"? in /homepages/42/d510927642/htdocs/andrewswims/wp-includes/pomo/plural-forms.php on line 210
 Tuesday’s first swim | Please tap on the glass

Owens Beach in Tacoma looks north across Dalco Passage to Tahlequah, upon the southern tip of Vashon Island. The hills of Point Defiance rise behind you as you stand there and block the winds and currents that race through the Narrows. The water is usually calm owing to the small fetch from all directions but east towards Commencement Bay, and the current nearly always pushes west regardless of tide. Along the water for 1km, there is a running path maring the boundary between the tall northwestern pines and the gravelly northwestern beach. This is the Tacoma open water swim spot.

Between Owens Beach and Vashon is 2.4km, but not without its challenges. Through this 400ft-deep waterway runs any ship, tug, tow, log boom, and recreational boat transiting between the southern and northern Puget Sound. Currents in the Narrows around the corner reach 6kts and come spilling out into Dalco Passage. Also, sometimes it rains.

Sunday morning, Tuesday and I put in at the Tacoma public dock at the edge of Point Defiance and set out to find, map, and understand the currents immediately before the birthday swim. There are no NOAA current predictions for a lot of the Puget Sound (I suspect because of the complexity the landscape induces), but the models I could find suggest that on an ebb flow, the middle of the Passage flows strongly east and eddies back to the west along the Tacoma shore. As we slowly made our way across and back in the bright morning sun and still air, not a current could be found. After two hours of searching for anything, water movement, drifting of the boat, tide lines, debris lines, anything, we gave up and headed into the beach to meet Melissa and Alison. 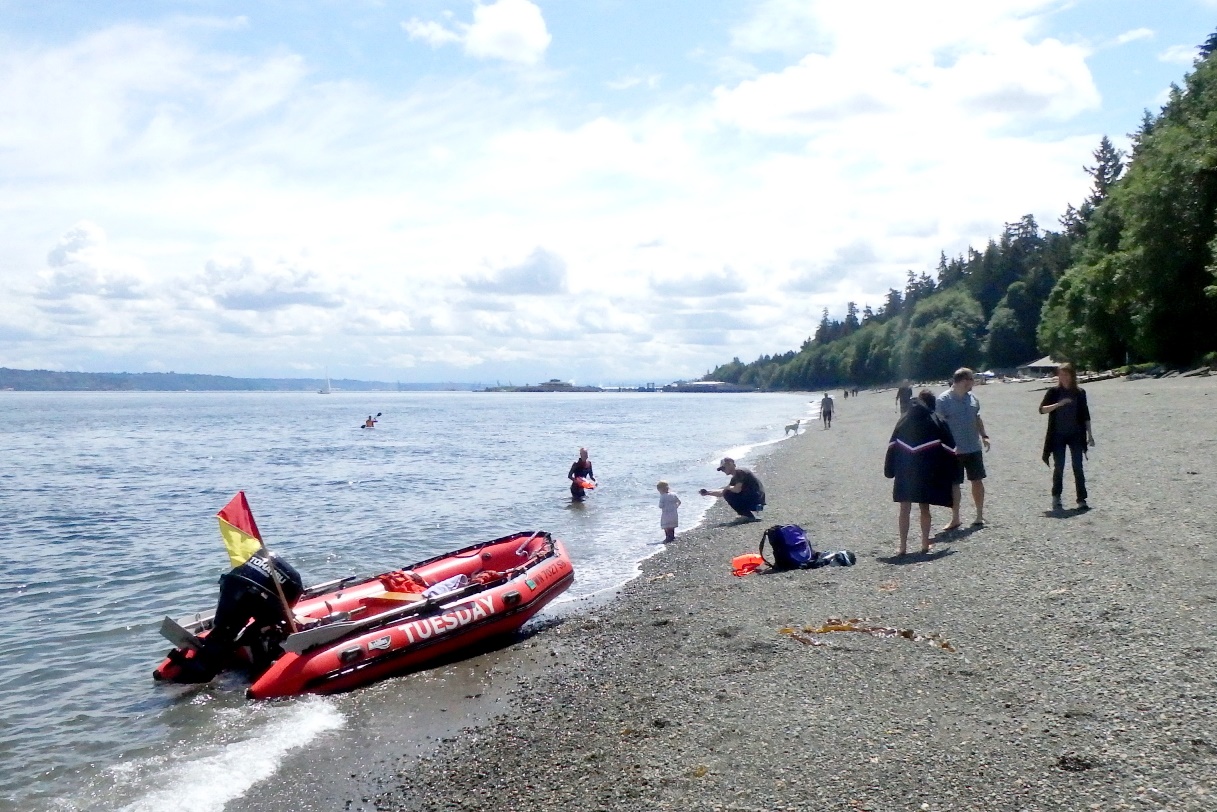 Melissa and Alison piled in and the three of us headed north to Vashon. When we reached the other side, where the swim would begin, we waited for the kayaker Heidi to complete her crossing. As we drifted near the beach, a moderate current pushed us to the west. Heidi reported some mid-channel water movement when she reached Vashon. These currents were not there thirty minutes earlier, I swear.

They jumped onto the sunny shore, smiled for a photo, and then jumped in the water and started the swim at 11:00am. The swim took a total of 52 minutes, and as swims go was straightforward. From my vantage, I was able to see many things a swimmer cannot. I could see the seals coming over to investigate, and watch the boats all safely pass us by. And I could finally see the currents. Where I’d previously thought perhaps I was no good at recognizing currents, I could immediately tell that I’d just been searching for them at a slack tide. The currents were ripping now.

About 1k from shore, we entered the strong eastbound current. The water racing out of the Narrows had made a hard right and was rushing past us. This torrent created boiling, swirling water, short choppy waves at the current interface, and a few standing waves with white caps. I was instantly jealous that I was not swimming. Melissa later told me that she could see the algae below her moving in different directions at different depths as the currents switched. And as suddenly as we entered the current, we were out the other side into a small, calm debris patch, as eddies roiled by behind us. 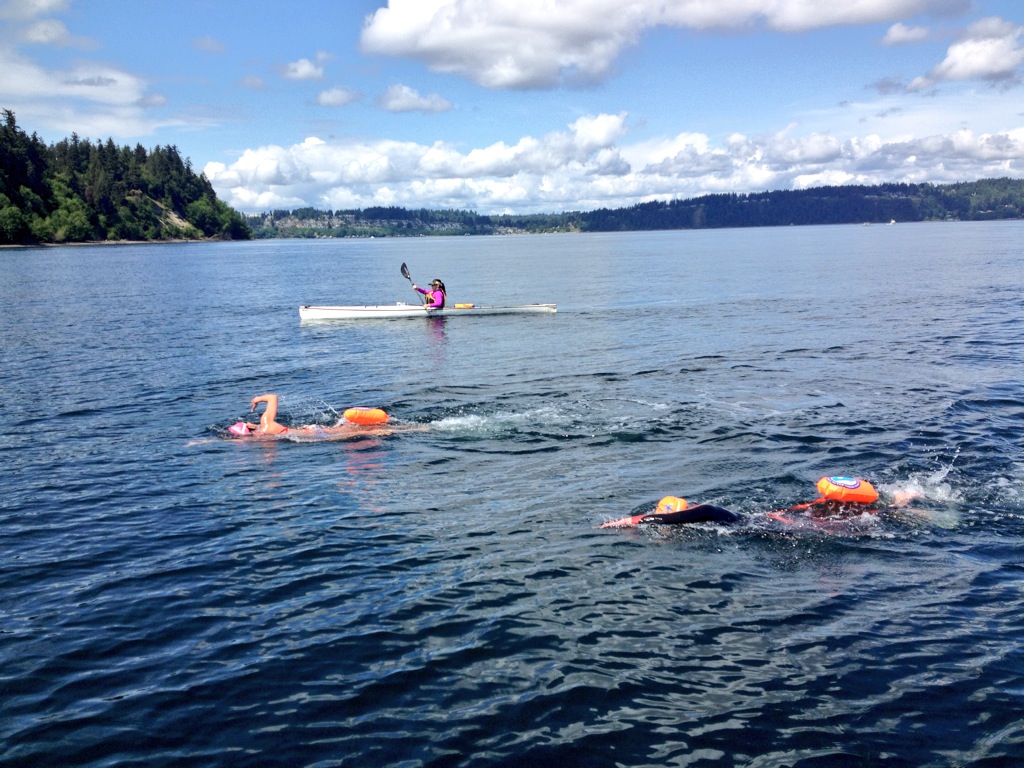 In the end, Melissa and Alison made it back to Point Defiance, and only 400m from where they planned to finish. The currents had done almost exactly what was expected (expectations set by this Tethys model), and so had we.

Back on the beach after, I was even more excited by this beautiful little boat that had just taken us there and back. She is very stable and handled well in some confusing water and I’m gaining confidence in my piloting and boat handling, and bigger things seem very possible. As an unexpected bonus, watching two friends swim for an hour made me want to swim, like really made me want to swim. It is that feeling that has been waning lately during the past few months of training, and it is nice to have it back. 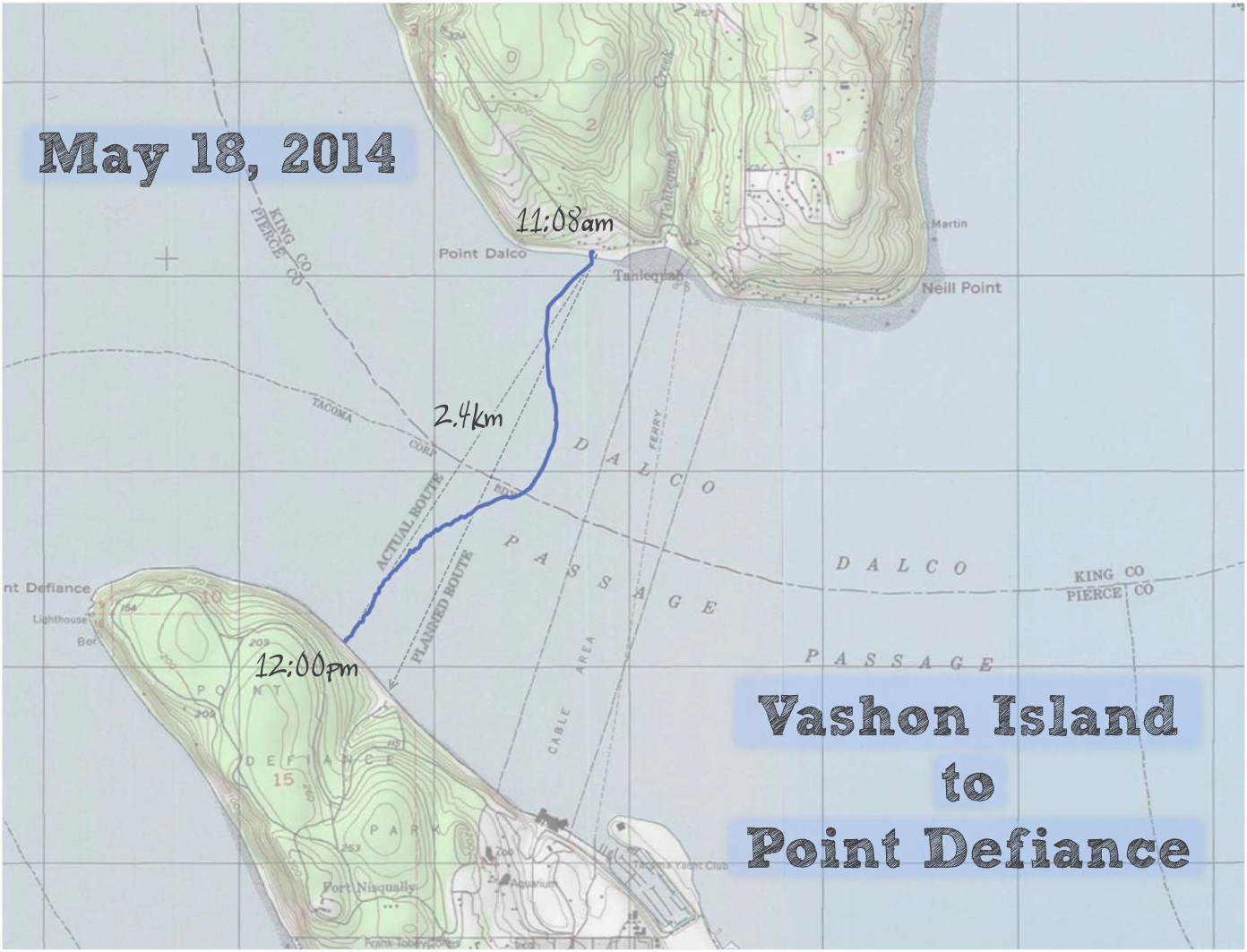