Warning: "continue" targeting switch is equivalent to "break". Did you mean to use "continue 2"? in /homepages/42/d510927642/htdocs/andrewswims/wp-includes/pomo/plural-forms.php on line 210
 Just a number | Please tap on the glass

“As a kid I always thought I would have swum the English Channel,” Dan says to Scott, but now he feels he’s “too old.” Luckily, Dan made this comment to the right person. “Without Scott’s encouragement, advice, and [assistance as] a training partner, I wouldn’t have even considered swimming the Channel,” says the present-day Dan.

It was back in 2003 when Dan said he was too old. Three years later, he swam around Manhattan. Two years after that, he swam the Catalina Channel. Then two days ago—eleven years after saying he was “too old” to swim the English Channel—Dan wrote this on the ceiling of the White Horse Pub in Dover… 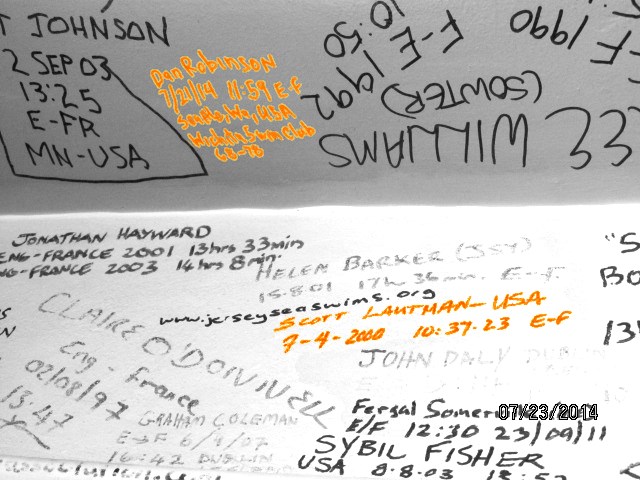 It is written right above Scott’s name.

Dan is not too old. Congratulations Dan.