So it isn’t just me. A published author, in an attempt to emulate real life, has felt such a value legitimate enough to bestow upon a supporting character in his short story! It is proof: humans do things that have personal meaning.

But this isn’t news to anyone, nor to me. Whenever the discussion about my Next Big Swim comes up, the Channel Question inevitably gets asked. My answer has been the same for the past few years. “No,” I say, “I like my swims to have personal meaning, and right now the Channel just doesn’t.” This way of selecting swims has been true for me since I began open water swimming, and I whole-heartedly believe it.

This isn’t to say some swims have not been stepping stones, but as a whole, my swim resume consists of water bodies that hold personal significance in my life. Manhattan is an obvious one, growing up just up river from the course. The Great Chesapeake Bay Swim ends on the island my mother lived on when I was young. Training swims in the Lake District where I’d vacationed. 8 Bridges (see previous post). The Strait of Juan de Fuca, near where I now reside.

Well, that last one. See, the Strait is sort of still the same body of water as where I train, the Puget Sound, sort of. And it is less than a four hour trip from Seattle, so it is basically like home. And I’ve been there, well, once, and…oh my god, I’d never been to Vancouver Island before this swim.

I’m a fraud! Here I am espousing the greatness and beauty of personal, meaningful, local swims, and I had never even set foot on Vancouver Island – apart from that one brief moment – until this month. I’d spent a grand total of barely two hours of my life gazing northward from Port Angeles towards Canada. Never actually swim in the Strait. And this personal connection was supposed to be my raison d’être? The reason I was swimming that swim?

What I think I wanted was a cool swim. What I was training for, and was mentally prepared for, was a swim in the Puget Sound near Seattle. That is my home water, where I train, play, and onto which I gaze longingly on a daily basis. That is where my big swim should have been. That was the personal connection.

And that is why I’m having trouble going back to the Strait. I want to, for sure. No self-respecting distance swimmer would call it a day and back down with a result like what I had, essentially amounting to a successful swim with an error in navigation. But it has become apparent that the Strait of Juan de Fuca is missing something critical. Something’s holding me back. A connection.

The narrow road ended abruptly and I made a quick left into a parking lot on the edge of a sun-filled meadow. My work clothes were exchanged for shorts on the hour drive south. I hastily emptied my pockets into the void beneath the driver’s seat and headed to the park’s info sign. After aligning the posted map with my iPhone map and using the sun as and mountains as a compass, I ran off down a gravel path, tripping over my sandals as I headed in what was hopefully a southerly direction. The shore was easy to find, and breathtaking, but not what I was looking for. I ran along the undulating coast, running because I didn’t know how far I had to go or how long the sun would be with me in the waning day. The short climbs up and down hills made my legs burn and reminded me how much I’ve lost my coordination for land activity, but I kept pushing south. Past two fishermen heading the opposite direction, the coastline grew more and more jagged and familiar. I ran, now trotted onward as the coastline pushed me west. And suddenly ahead, a cliff rose from the water, a cliff burned clearly in my memory. I’d run past them, the rocks I sought. Just behind me now, they were unmistakable, there in the cove, low to the water, protected from the wind. Where I started my swim 10 months ago to the day.

How had I never been here, to this spot or any like it on the Island? There: that is where I climbed out to start on shore. Why has it taken me so long to make this stretch of water my own? There: I stood on this rock while Steve bumped his kayak on to shore to start his own crossing. How can one look at those mountains, so clear on this spring day, and not be tempted? There: I jumped back in there, the tide was a little higher that morning. And why did I leave my suit in the car?

The sun wasn’t to set behind the cliff for another hour, and the sun felt warm that day. If the Strait and I are to ever be friends or lovers, we were going to begin right then. It was just the two of us in the bright evening light. No one was around to see me leave my clothes and modesty on the rocks as I swam out through the kelp. There was a tug, a voice saying, “come swim out a little farther.” 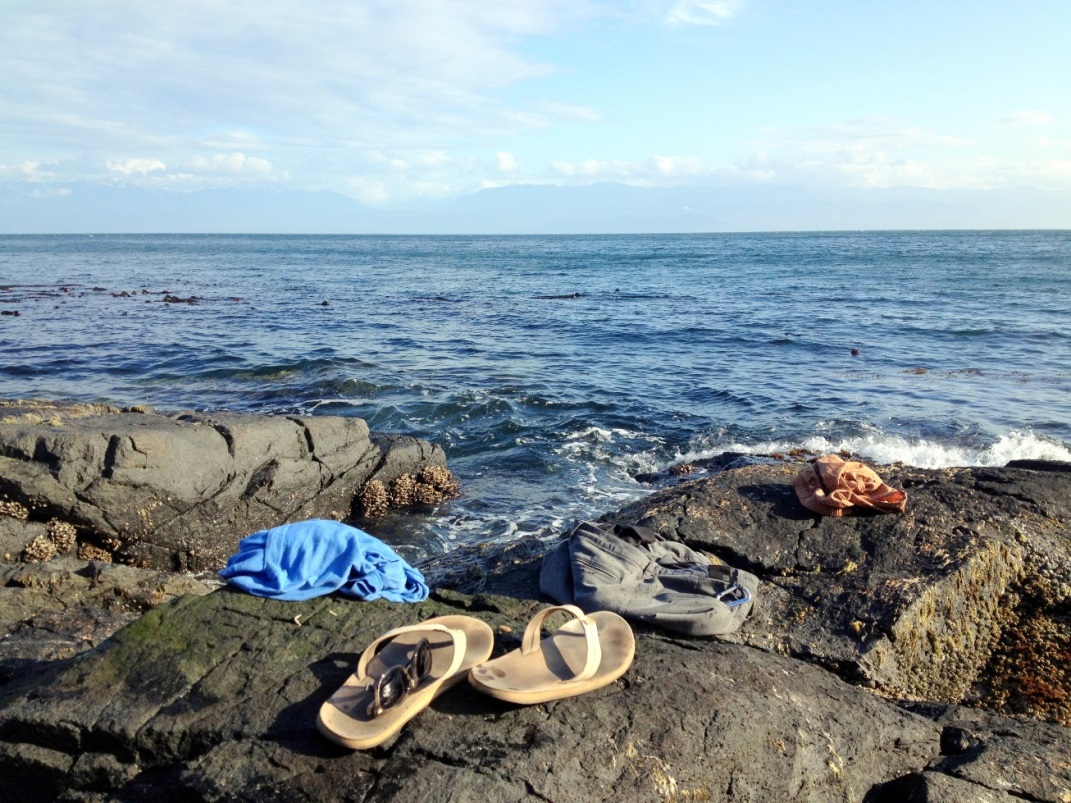